From the recent edition of “Travel Weekly”:

Miraval Group has acquired the Travaasa Austin Resort from Amstar Group and will spend the next two years expanding and redeveloping the 220-acre property into what will become the Miraval Austin.

Miraval will increase the hotel’s room count to 120 from 70, expand the property’s main restaurant and more the double the spa space. Miraval plans to finish the redevelopment in January 2019.

Miraval, which operates its eponymous resort in Tucson, Ariz., earlier this year took over spa operations at Southern California’s Monarch Beach Resort as part of its expansion plans for its Life in Balance Spa brand. Miraval also said this year that it will redevelop the Cranwell Resort in western Massachusetts.

As opponents of the Dumb Growth project to “save” a rotting Gilded Age mansion by building a massive new big box franchise-style hotel have stated from the start: Amstar, the Otto Happel family office real estate portfolio, is not in the hospitality business.

Amstar buys and sells commercial properties. Most of their total return is generated in the exit strategy, also known as “the grave”. Main investor Otto Happel may eventually decide to exit the “Travaasa wellness” brand entirely; then what happens with Elm Court?

In our opinion, bamboozled by unrealistic promises of tax revenues, boards in the towns of Stockbridge and Lenox failed to grasp what was behind the bizarre idea of using a derelict mansion as a fig leaf for a Courtyard By Mariott or Hilton Gardens, or whatever is at the end of the exit ramp when Amstar dumps the property. Let us hope that Amstar investor Otto Happel has a closer look at the project and concludes that building a project in a neighborhood overwhelmingly opposed to the idea is just plain bad business.

The purchaser of the Travaasa “flagship” in Austin, Miraval, recently purchased the nearby Cranwell resort, slated for significant expansion during 2017. With massive development also proposed for the former Desisto property across the town boundary in Stockbridge, we ask once again: how is any of this sustainable? Dumb Growth compounds to absurdity and then inevitably collapses.

Anyone who has been involved in the ongoing struggle to prevent a monstrous big-box style franchise-ready motel — not unlike the one that now looms over Route 7 north of Lenox — from being dropped into the middle of a historic, residential neighborhood, will remember the spectacle of a red-faced Amstar CEO Gabe Finke lecturing and chastising  the “little people” gathered inside the Stockbridge Town Hall.

HOW DARE YOU GET IN MY WAY

Having heard Finke express Amstar’s long-term commitment to the well-being of the town and for the careful restoration of Elm Court, grandly throwing in an offer to pay for a controversial, unwanted and unnecessary sidewalk that would forever change the character of the road and the neighborhood, the curious reader might ask: where is Gabe Finke now? For that matter, where is Amstar?

Amstar Group, the real estate fund that owns the Travaasa brand, represents one part of the global real estate holdings of German billionaire industrialist Otto Happel, with a family office based in Lucerne, Switzerland. Finke once worked for Happel, but roughly a year ago the boss apparently had enough. Who knows what the distinguished Mr. Happel made of the Elm Court acquisition and the absurd plan to hatch a luxury resort in the middle of a neighborhood overwhelmingly opposed; what we do know is that Finke was shown the door in a split described in the business press as a “messy divorce”, with Amstar Advisors (Finke still at the helm) parting company with Amstar Group.

A year later, even the name is gone: Finke re-incorporating as Ascentris. We note the complete absence of any holdings in the hospitality industry in the revamped Ascentris portfolio. In any event, Finke, the man who hoodwinked a naive Stockbridge Select Board, is long gone from the Elm Court scene. So much for long-term commitments!

WHICH SHELL HIDES THE PEA?

None of the town boards reviewing the proposal seemed at all concerned that Amstar Group lacks a track record in the hospitality industry; by industry standards the Travaasa “brand” is both too small (a mere two resorts in operation) and too young to have been adequately tested by market cycles. In any event, Amstar Group is not in the hospitality business. They are in the “cradle to grave” portfolio flipping business.

We predict that such lack of basic due diligence regarding the private partner in this high-impact and dumb-growth project will come to haunt both towns with a long list of unintended consequences. If the monstrous thing is ever built. Maybe the honorable Mr. Happel will finally have a closer look at where his money is being spent, grasp the fundamental unsustainability of the idea, and pull the plug. 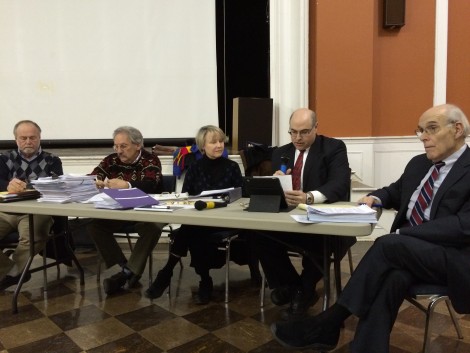 From our perspective, the public review of the Front Yard/Amstar proposal for Elm Court represents a Berkshires variation on a “too big to fail” bail-out, strikingly similar to the sorts of public bail-outs of fraudulent corporate activities during the financial crisis of 2008-2009, bail-outs that precipitated the Occupy movement.

In the case of Elm Court, a wealthy family (Vanderbilt-Wilde-Berle) has allowed their sprawling mega-mansion to decay, and then has effectively transferred the cost of the repair to the public, by selling the derelict property to a corporate “partner” who will dump a four-story spa hotel into the heart of our densely settled residential neighborhood, all in the name of “saving” Elm Court.

We are disappointed that our local boards appear to be playing along with this toxic bail-out, without giving serious, detailed consideration to the carefully researched and wide-ranging objections submitted by the neighborhood.

Elm Court is not the only history worth preserving. Our neighborhood, including other former Gilded Age properties such as Bishop Estate and Winden Hill, has its own strong, vital history worthy of respect and preservation. Instead, we now face a future of digital speed signs, road-widenings and other so-called traffic calming measures that will forever change one of the most distinctive and appealing roads in the Berkshires. Over the long run, this will be seen as a profound loss to the town, and to the Berkshires.

Why has everyone — from Selectmen to town staff — so passively lined up behind such a preposterous scheme, without exploring more sustainable and more reasonable alternative uses? Why is the disrepair of a private property, once owned by one of the wealthiest families in United States history, a matter of public interest? Is there some deeply entrenched pattern of obedience to the Lord of the Manor in play here?

From the start of this long process, the applicant has refused to budge on the core issues of massive scale and high intensity of use. We hope that the Lenox ZBA will listen carefully to the depth and seriousness of our concerns, and impose strict conditions on the special permit, introducing a measure of moderation and balance to Front Yard LLC’s monolithic proposal.

Without such moderation and restraint, Front Yard can be  sure that the neighborhood will be openly hostile to their wretched big-box “Travaasa” spa-hotel for many years to come. Further, the town of Lenox will have alienated an entire neighborhood by selling us out to a shadowy real estate “fund” who successfully played rope-a-dope with town boards, slipping through review with major aspects of their plans left undisclosed and undiscussed.

The problem with such actions? Public trust and good will are currencies you can only spend once. Once they are gone, they are likely gone for a long time.